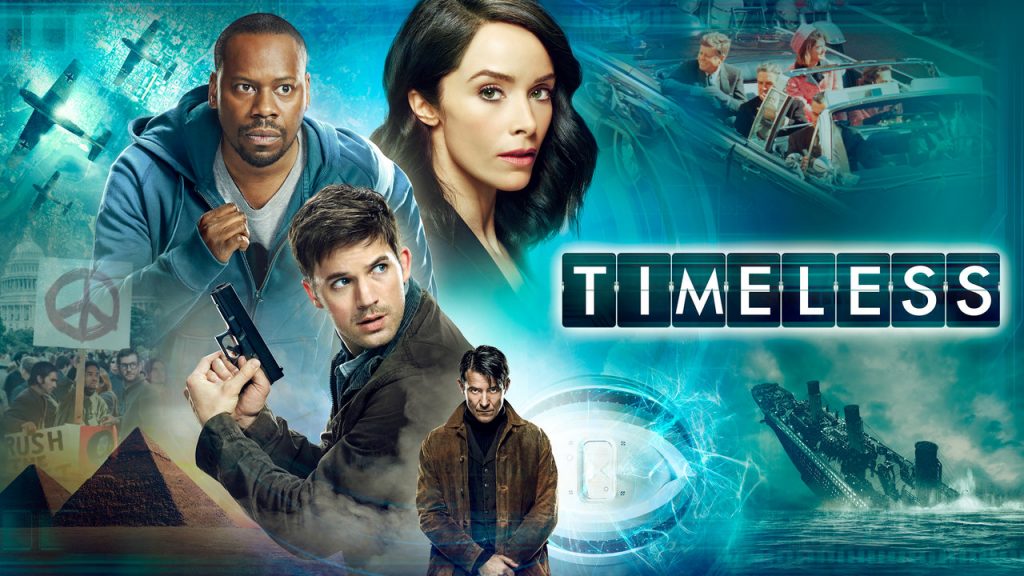 To briefly acquaint the uninformed with the premise of the show, it follows the story of a trio of time travelers – a history professor (Lucy Preston, played by Abigail Spencer), a soldier/bodyguard (Wyatt Logan, played by Matt Lanter), and a coder/pilot (Rufus Carlin, played by Malcolm Barrett) – as they work together to stop time-traveling terrorists from disrupting history. These terrorists are led by criminal mastermind Garcia Flynn (played by Goran Visnjic), and the chase that ensues is as action packed as it is dramatic. I detest spoilers, so I don’t want to give too much of the plot away. What I will say is that the pilot revolves around the Hindenburg disaster of 1937 (aka, the giant blimp explosion), and it’s absolutely stellar.

Now, let’s get the obvious out of the way – this show shares DNA with Doctor Who. A lot of DNA. Like, so much that I can confidently say, based on the pilot alone, that this feels like an American-produced Doctor Who series, sans the Doctor. This is by no means a bad thing – truth be told, I think it’s impossible not to make such a comparison, considering how wide the Doctor Who fandom has spread, not to mention that both of these shows share a core component (time travel). But I don’t think Timeless is running away from Doctor Who – if anything, it embraces the influence of its British cousin.

Specifically, Timeless reminds me of the Tennant-era of Doctor Who, back when Jack Harkness was on the show. Logan is clearly this show’s charming, but trigger-happy Jack-like character. He’s grounded by Lucy, who leads the group with her cunning wisdom, even as she butts heads with Logan (so she’s a nice mix of the Doctor and Rose). The trio is then rounded out with Rufus, a black scientist-turned-time-machine-pilot who is kinda shy, but can stand up for himself when the time calls for it (much like Mickey).

I’m sure I’m overthinking it, but it’s fun to make these little connections.

All things being equal, though, Timeless is definitely not a Doctor Who knock-off. Our heroes aren’t gallivanting on some great adventure through time and space; they’re thrust into chaos with practically no guidance as they’re rushing against the clock to preserve the past, stop the terrorists, and save the future. Lucy can help provide context, but she is largely flying by the seat of her pants, with Logan and Rufus in tow. Based on this fact alone, the show could have fallen apart in the first 10 minutes, but Timeless thrives on the frenetic energy. You don’t know what’s going to happen next, but you want find out, and you end up questioning the outcomes just as much as the characters do (in the best possible way, trust me).

The show is also not as cavalier as Doctor Who about meddling with time. There are very strict rules in place that must be followed. For instance, nothing must change in the past. They can’t save anyone extra, they can’t kill anyone extra, lest they cause a potentially catastrophic ripple effect through time. The characters are also explicitly prohibited from crossing their own timeliness, regardless of when their timeless occur, due to the paradox effect (but let’s be real, we all know that SOMEONE is going to cross their own stream and break the universe. It’ll be a midseason or regular season finale for sure. I’m willing to bet money, I am).

I honestly can’t remember the last time a pilot hooked me so thoroughly as this did. Maybe Hannibal (another excellent NBC production), but even then, this is a show that has really set itself apart as a serious prime-time contender. The production values are high, the casting is solid, the writing is crisp, and the story – oh my god, the STORY. The deluge of clips and commercials would have you believe this show is a comedy first, drama second, but that is not at all the case.

If anything, the commercials spoiled the funniest moments (there are more, though they don’t land as nicely), but I was totally fine with that because the drama and action are so intense. Seriously. The fight scenes are precisely choreographed, and the narrative delivers some unrelenting beats. My jaw was on the floor on at least three separate occasions, and the show did. not. let up. It delivers punch after punch, each one more powerful than the last until I was left breathless at the end of the episode, craving more.

That’s not to say the show is without its flaws. Within the first five minutes, there were not one, but two dick jokes. Two. (Because one wasn’t enough, I guess?) There were also a couple of mildly sexist jabs/moments that felt unnecessary, but the show made up for it by dealing with racism in a really empowering (and also terrifying) way. I also like that the show gives equal attention to all of the characters without being too on the nose. Lucy is struggling to find her place in the shadow of her mother’s legacy. Logan is haunted by an emotionally intense past. Rufus is hindered by self-doubt, but is also being blackmailed for something we don’t know about yet. And Flynn, the bad guy that started the whole ordeal? He’s a zealot who believes his is a righteous cause.

And all of this was just in the pilot.

At this point, Timeless is a show with infinite potential. It had a few stumbles, but if the pilot is an accurate gauge of what’s to come, this season is going to be one hell of a ride and I am 100% here for it.