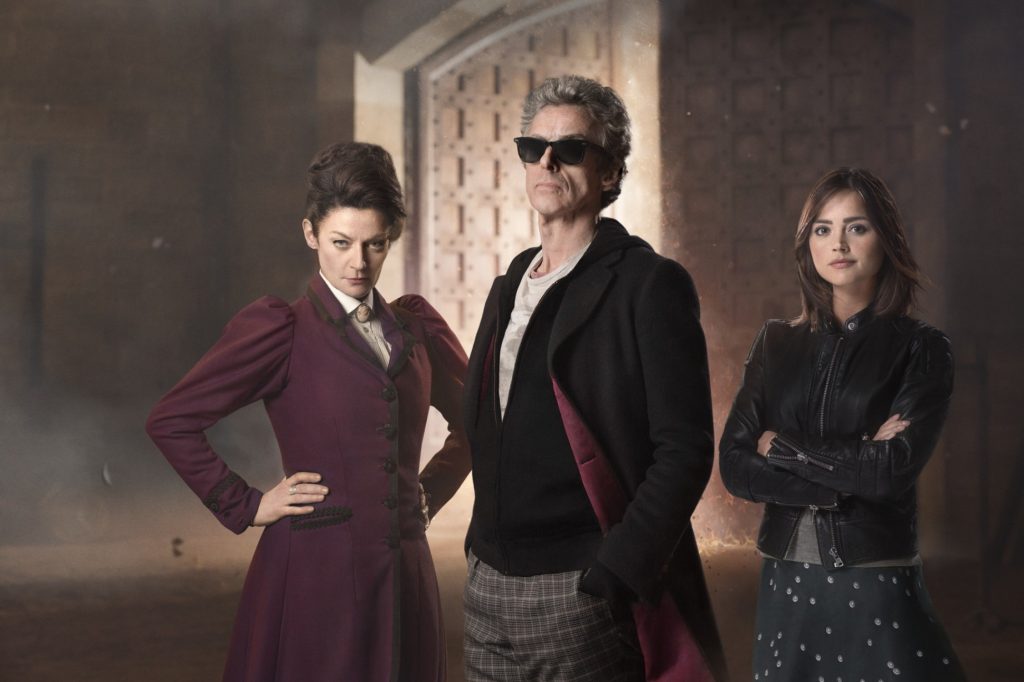 SPOILERS AHEAD for the latest two episodes of Doctor Who, and the show at large. You have been warned.

I’ve been a Doctor Who fan since the beginning of Matt Smith’s run back in 2010 and, man, what a time it was to be a Whovian! There was a brilliant new Doctor, a fiery new companion, a new showrunner, and a bigger budget than ever before. I’d even venture to say that, as far New Who goes, Season 5 is the best season since Eccleston’s single-season run as the infamous Doctor back in 2005.

After Smith’s first season, I was hooked, and I immediately took to Netflix to catch up. I watched all of Tennant’s episodes, and then I jumped back again to watch Eccleston’s. Sure, there were a few hokey episodes, and I didn’t really care for Russell T Davies vision for the show toward the end of his time as showrunner… but even Davies worst episodes still had heart and consistency, which I think are missing in Moffat’s last few seasons of the show.

Please don’t misunderstand — I am not a Steven Moffat hater. I was actually his biggest fan for the longest time, considering him to be a sci-fi genius! All of his episodes prior to becoming the showrunner were inspired, and Matt Smith’s first season is one of the tightest collection of time-travel stories I’ve ever seen unwind, period, ending with such a big bang that one of the final episode was literally titled “The Big Bang.”

But something changed after that first season. It’s almost as if Moffat poured all of his creative genius into Season 5, and since then he’s been churning his wheels while simultaneously throwing ideas on a canvas, hoping that something congeals enough to stick and pass as acceptable.

Season 6 was convoluted hot mess. Yes, there were some stand-out episodes, such as Neil Gaiman’s incomparable “The Doctor’s Wife,” but the show started to collapse in on its own lofty ideas.

Season 7 continued this trend, and it was only exacerbated by the idea of making each episode an encapsulated story, like a collection of single-episode movies. Again, there were a few highlights here and there (the premiere was excellent, and I have loved every episode with River Song), but by the end of that season, it felt like, Moffat was scrambling to create a sense of danger or urgency for Smith’s final episodes.

Yes, I’m skimming (a lot), and I don’t mean to go on a rant, but I think it’s important for you to understand where I’m coming from as a Doctor Who fan, and to know that don’t hate the show. I am critical because I love the show; I have loved it from the day I first watched it, and it has pained me to no end to see it decline in quality, even as it soars in popularity.

Season 8 — Capaldi’s first season — is a prime example. Admittedly, I was sad to see Smith leave his bowtie behind (I could write for days and days about his interpretation of The Doctor), but I was excited to see what a grizzly old Doctor would bring to the show — and yet, I was left wanting more.

The biggest issue I’ve had with Capaldi’s run thus far is the complete and utter lack of consistency. Episode to episode, there is no grander theme that ties everything together. Yes, there was the question of “is The Doctor a good man” at the beginning of Season 8, but then the show completely shifted focus to Clara Oswald and her struggle to come to terms with this crazy old man who claimed he was The Doctor.

It’s a move that made sense in theory; Clara was representing all of us who were still trying to process that Smith was gone and Capaldi had become our favorite (or not-so-favorite?) Time Lord, but the show seemed to lose sight that the audience doesn’t care about The Doctor’s companions nearly as much as we care about the man himself — especially now that he has a new face and personality and kidneys.

Needless to say, I wasn’t pleased with Season 8, and I was 100% ready to quit the series after they decided to keep Clara on at the last second, forcing her back into the story for yet another season (despite having the perfect ending). I was frustrated with the direction the show was going, and I was frustrated that so many people loved that blasted direction.

But time wore on, and my frustration calmed down, and I found myself getting excited about the newest season because I will always be a Doctor Who fan at heart.

So, I watched the Season 9 Premiere last weekend, and I just finished watching the second episode, aaaannnddd…

My feelings are incredibly mixed.

First off, I loved the premiere episode, the Magician’s Apprentice, more than I thought I would. I went in with low expectations, and was pleasantly surprised by how much I enjoyed it. I adored the dark opening (hand mines!), and the revelation that the little boy was Davros was something I didn’t see coming.

As for the rest of the episode, it was funny, daring, and had a nice twist at the end (Davros is really back!? Skaro has been rebuilt!?). Sure, not a lot happened, and some of it was a bit lame (frozen airplanes? Dude jokes? A man made of of snakes? Really?), but I was willing to forgive the light and nonsensical plot because I knew it was just one half of a grander story. I was ready to jump headfirst back into the fandom.

If only the second half had been grander.

Like so many of Moffat’s self-written episodes these days, The Witch’s Familiar was a mixed bag. Easily the best and strongest aspect of the episode was Clara getting forced inside a Dalek console. Not only was the a brilliant piece of meta-humor (the first time we met Clara, we found out she had been turned into a Dalek!), but it turned darkly scary when she couldn’t identify herself as Clara Oswald; instead, she only had the ability to scream the words “I am Dalek!”

Unfortunately, the rest of the episode fell rather flat. Missy is a character that continues to grate on my last nerve. Between her high-pitched whining, her ridiculous accents, and her casual indifference to what’s going on around her, I find it incredibly hard to take her seriously as a villain. Yes, she does some terrible things — trying to convince The Doctor to kill Dalek-Clara being one of the scariest things she’s done to date — but she does everything so flippantly and erratically that I don’t know whether to laugh at her absurdity, or truly be terrified.

I do like her more in this season than the last, though, but only because of the plot-twist she’s bringing to the story — that she and The Doctor are actually friends. I don’t know how much that notion actually holds up according to Classic Doctor Who lore, but I’m willing to accept it if the writers actually do something fresh and original with it. But right now, I’m worried that they won’t, because Missy feels like every other two-dimensional television psychopath.

The Doctor is another character I’m struggling to understand, simply because he has no definition. He said it himself in this episode — “I’m inconsistent” — which further cements my growing suspicion that Moffat has no idea what he wants to do with Capaldi.

Eccleston, Tennant, and Smith all reshaped and redefined the character in their own images. Eccleston was the battle-hardened warrior who put on a goofy exterior because he couldn’t deal with what he had to do in the Time War.

Tennant was a more refined Doctor, basking in the glories of his victories and reveling in the praise of those he saved. He was the dashing, fearless hero, but also the hero who continued to harbor regret over those he wasn’t able to save.

Smith took both of those personalities, and infused them with his own sense of child-like wonder. He truly was a “madman with a box,” and even though he had the youngest face of all the Doctors, he had the oldest eyes and the oldest soul. He empathized more than his last two incarnations, but he still had the rage of the last living Time Lord.

Capaldi continues to evade a defining characteristic. His Doctor is a regeneration that shouldn’t have happened, so I get that he was struggling to understand who he was at first — that was one of the reasons why I was so excited to see his version of The Doctor come to life on screen! He is a Doctor who isn’t sure if he’s good or bad, if he’s willing to kill or if he can still show mercy — but this crisis of identify/morality has never been fully addressed.

Instead, we get a Doctor who masks his own uncertainty with wanton and wild disparity. One moment he’s on the verge of killing or letting someone die, the next he’s throwing a party for himself on top of a tank in the middle ages, and the next he’s riding around in Davros’ weird Dalek Hoveround.

Sure, all of these things sound like acts of absurdity that The Doctor would do (or has done) at some point or another — but not Capaldi’s Doctor. Not this Doctor. Not the Doctor who is told by a Dalek that he’s not a good man, but rather a good Dalek.

That should terrify anyone who knows anything about the Daleks.

Speaking of the Daleks, I was excited to see Davros return to the show, but I was super disappointed when his master plan was to trick the Doctor into giving him a healthy dose of regeneration energy so he could refuel his troops. I was also bummed when the Time Lord/Dalek Hybrid idea turned out to be nothing special, and all the Daleks ended up dying in a steaming pile of old-Dalek sludge.

I was most disappointed, though, with the deus ex machina at the end, which has become Moffat’s signature trope. Dalek-Clara was only able to scream “mercy” at the Doctor just before he killed her because the Doctor went back in time to save child-Davos, resulting in an act of mercy that Davros later (unknowingly) programmed into his genetically-superior children.

Just typing that hurt my head — and wow, this post is getting out of hand.

Case in point, the two-part Season 9 Premiere wasn’t a pair of defining episodes for Doctor Who. However, despite the many problems I’ve had with these last few seasons of Doctor Who, I’m still enjoying the show. I probably won’t rewatch any of these episodes, but I’ll keep watching week-to-week with the hope that the show will some day return to its former glory. But, with the show’s ever-rising popularity, I don’t see that happening any time soon.

Other random things to note: