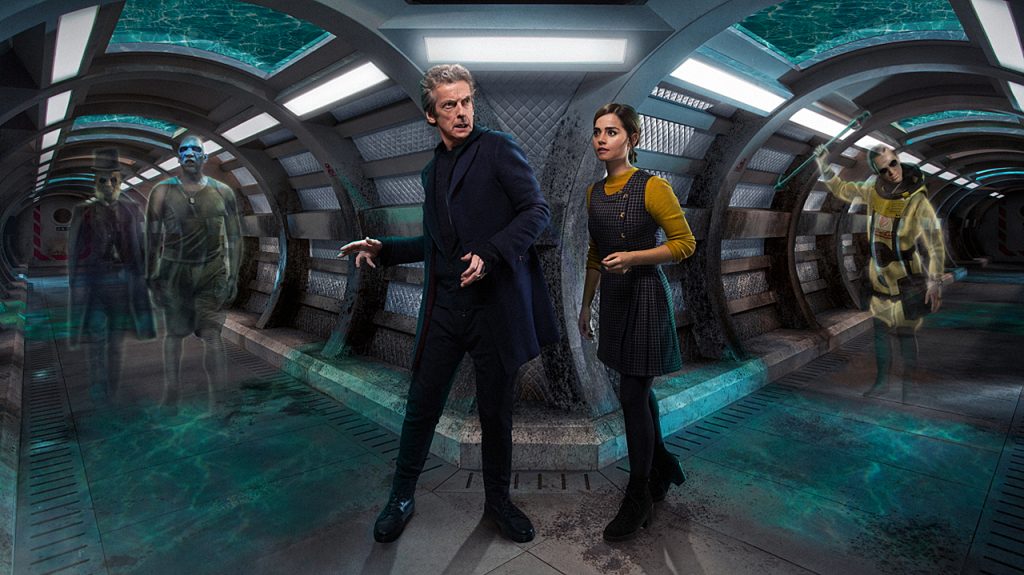 ***As always, SPOILERS abound in the review below, so read at your own risk.***

I’ve already talked about my qualms with the current vision for Doctor Who, so I won’t continue to run down that rabbit hole. What I will say is that after I sat down to watch the latest episode, Under the Lake, with almost no expectations, I had to walk away from my laptop to make sure my jaw wasn’t broken by the end of the episode. Why?

Because this was the best episode of Doctor Who in a long, long time.

I’ll be honest, I was a little worried when I saw the teaser for this episode. It looked a bit campy (ghosts on an underwater base?), and when I saw the lead writer at during the title crawl (Toby Whithouse), I cringed a bit. He wrote the David Tennant episode School Reunion, which didn’t really impress me back in the day. Same thing with the Matt Smith episode, The God Complex, which was just too hokey for my taste. To Whitfield’s credit, though, he did write two highly enjoyable episodes — The Vampires of Venice and A Town Called Mercy — so the guy was pretty much 50/50 for solid Who episodes, but he really delivered the good stuff with Under the Lake.

Right from the beginning, the episode kicks off with a wonderfully suspenseful opener that is decidedly Doctor and Clara-less. Instead, we meet an underwater mining crew that uncovers a mysterious alien ship and a (surprisingly) scary looking ghost. In the kerfuffle of it all, the leader of the crew dies in a freak accident, only to come back as a ghost himself, much to the dismay of the other crew members.

Time jump to three days later, and the TARDIS materializes, bringing the Doctor and Clara into this bizarre turn of events.

Now, as you know, I haven’t been the biggest fan of Capaldi’s interpretation of the Doctor, due to his inconsistency. One episode I think he’s brilliant, the next he leaves me scratching my head. It’s an issue I’m not sure will ever be remedied, but I 100% loved him in this episode. From his clothes, to his mannerisms, to his wicked one-liners, Capaldi was utterly on fleek. I’m not sure if it was the direction of the episode, or the remarkably strong writing, but something clicked in this episode that hasn’t clicked in what feels like ages, and Capaldi just nails it as the Doctor.

“What’s wrong? You’re not happy. Why aren’t you happy? Tell me.”

I think he might have won me over in this episode with that single line. The way he speaks with such care when addressing the TARDIS is reminiscent of Smith’s Doctor in all the right ways, and it serves as a great reminder to the audience that the TARDIS is very much alive, and that she does not like where the Doctor has taken her.

His lines to the TARDIS aside, Capaldi was firing on all cylinders in this episode. He brings an enormous presence to each and every scene as the Doctor, and delivers a performance that is all at once menacing, insightful, delightful, and hilarious. None of those attributes sound like they should work together, but they do, and they serve as a testament to just how good of an actor Capaldi truly is, and proves that he really is worthy of the mantle of the Doctor. “Surely being around me just makes you cleverer by osmosis.” #Brilliant

Capaldi wasn’t the only actor on point in this episode — all of the supporting cast deliver strong performances, to the point where I didn’t feel like I was watching an episode of television. It felt like I was watching a story unfold right before my eyes, and each actor perfectly embodied their characters. I especially liked the deaf character, Cass, played by Sophie Stone, who is actually deaf in real life! She is appropriately intense as the woman in charge, and the way she tells-off the Doctor is easily one of the highlights of the episode.

The episode itself is super solid too. It evokes the sensation of classic sci-fi, and you feel a real sense of danger throughout the entire episode — especially when more of the crew members start to get killed off. The twist that whoever sees the markings on the alien ship come back as ghosts when they die, and that the ghosts themselves re sabotaging the base to kill everyone, was something that I was not expecting — and then Whithouse took a step further! The ghosts are actually transmitters, beaming out the location of stranded alien ship to some unknown person(s) or thing(s). It’s creepy and modern and classic perfection.

The one area where I felt the episode was lacking was with Clara. Again, she feels like a throwaway companion. I just don’t see the reason for having her there — literally anyone could take her place, and it wouldn’t have changed the outcome of the episode at all. That being said, she did have some delightful bits of banter with the Doctor —

“Clara, why don’t I have a radio in the TARDIS?”

“You took it apart and used the pieces to make a clockwork squirrel.”

— and did anyone else pick up on the fact that the reason why Clara is so eager to rush into dangerous adventures is because she’s trying to keep her mind busy? I think it’s because Pink died last season (thank you, Missy), and Clara can’t bring herself to stop and deal with all of her emotional baggage. The Doctor at least hints at this, going out of his way to mention relationships, and he and Clara have a rather touching moment in the TARDIS. It will be interesting to see if this becomes a more fleshed-out plot point, or just meaningless pieces of dialogue in a non-Moffat episode.

And speaking of Moffat, I just want to say that I think this episode is especially great because the Doctor isn’t questioning his own morality or trying to save the universe from utter destruction; he’s simply trying to save a random crew from dying and turning into ghosts. As crazy as that premise sounds, the episode works because it’s small in scope, giving all of the characters time to breathe and grow without worrying about the exposition of grand and lofty ideas.

It’s a shrinking of scale that Moffat should take into consideration when writing his own episodes and running the show in general. I would even go so far as to say that this episode should be the rule of thumb for Doctor Who moving forward. Not because it’s a groundbreaking episode, but because it’s the first in over a season where I actually felt engaged as an audience member and invested in what happens next.

All in all, this was a fantastic first half to another two-parter. Having the Doctor go back in time to figure out what happened to cause such a series of unfortunate events was a great cliffhanger, and having him show up as a ghost made my lose my proverbial shite. Bring on part two!