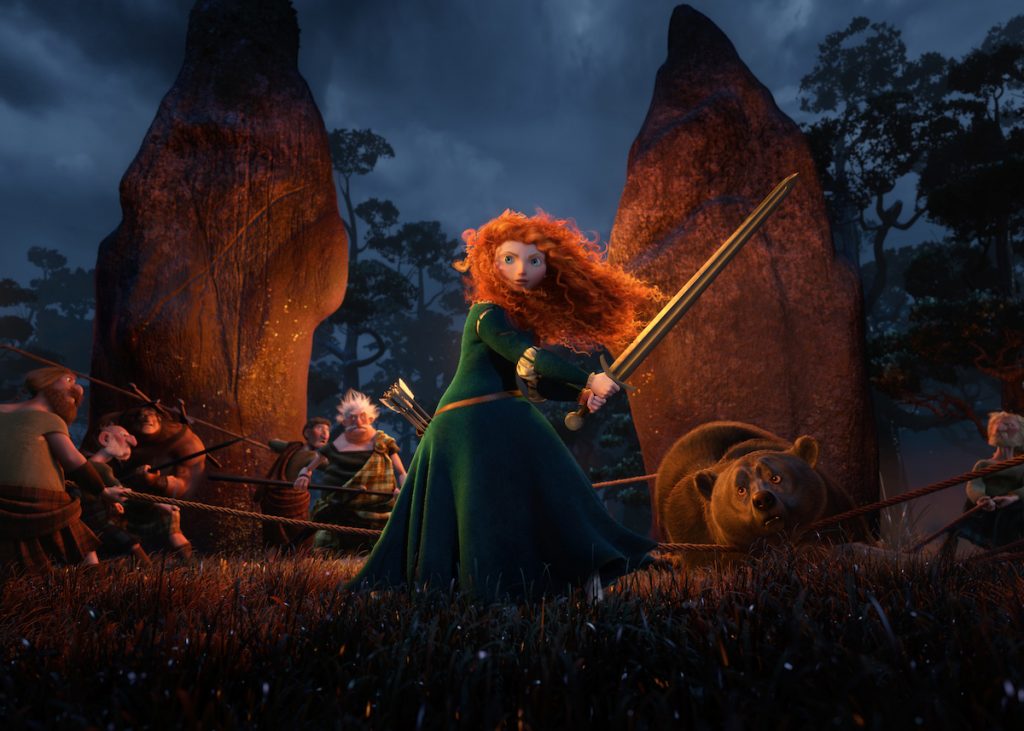 I don’t want to spoil the story for anyone, so all I will say is that this movie is a classic Disney tale. The teenage princess, Merida (voiced by Kelly Macdonald), is tired of the rules and regulations of palace life and her overbearing mother, Queen Elinor (voiced by Emma Thompson), so she decides to run away and “change her own fate” by eliciting the help of a crazy witch who tricks her (sound familiar?). She then realizes she’s made a terrible mistake, and spends the rest of the movie trying to make amends for what she’s done (where have we heard this before?).

But this is not Pixar film. Not really.

This movie doesn’t have the heart of a true Pixar film. Sure, the graphics are eye-bleedingly gorgeous, the atmosphere is incredible, and the animation is the cream of the crop, but it lacks the emotional depth and significance that has made previous Pixar movies so resonant and relatable.

In Toy Story, I believed a toy could fly; in Monsters Inc., I discovered that laughter truly is the best medicine; in Wall-E and Up, I learned that love transcends all kinds of barriers. I believed, I discovered, I learned all of these things, all of these life lessons, because Pixar created extremely dynamic characters and placed them in incredible circumstances. The narrative depth of these past films is what makes them great, is what makes them stand out even against the modern animated wonders of today, but Pixar failed to capture that depth in Brave.

The plot is shallow, the characters are static, and the movie lacks the different layers of meaning that have been staples of past films (you know, the jokes and themes that are just for mom and dad). To be quite honest, this movie feels like Pixar’s failed attempt to capture the combined essences of DreamWorks’ How to Train Your Dragon and Disney’s Tangled (both of which are, in many ways, far superior films).

To be clear, though: I am not hating on Pixar. As I’ve already mentioned, I grew up with Pixar, and they’ve continuously blown me away by the quality of their movies and the caliber of their filmmaking. You can instantly identify a Pixar film from DreamWorks or Disney by just the way it looks – and Brave looks spectacular – and I think that’s the mark of a great studio. The music is also fantastic – composed by Patrick Doyle, who most recently scored Thor and Rise of the Planet of the Apes – and it perfectly augments the atmosphere of the film. But I fear the age where Pixar always wins the Oscar is coming to a close.

Does this review mean that I think Brave a bad movie and a waste of time? Absolutely not! Brave is a great film, with some truly awesome moments, but it’s not a Pixar-quality film in terms of characters and story. It’s your average, run-of-the-mill princess tale – a classic Disney story that will leave you largely entertained, but somewhat unfulfilled and desiring something more.