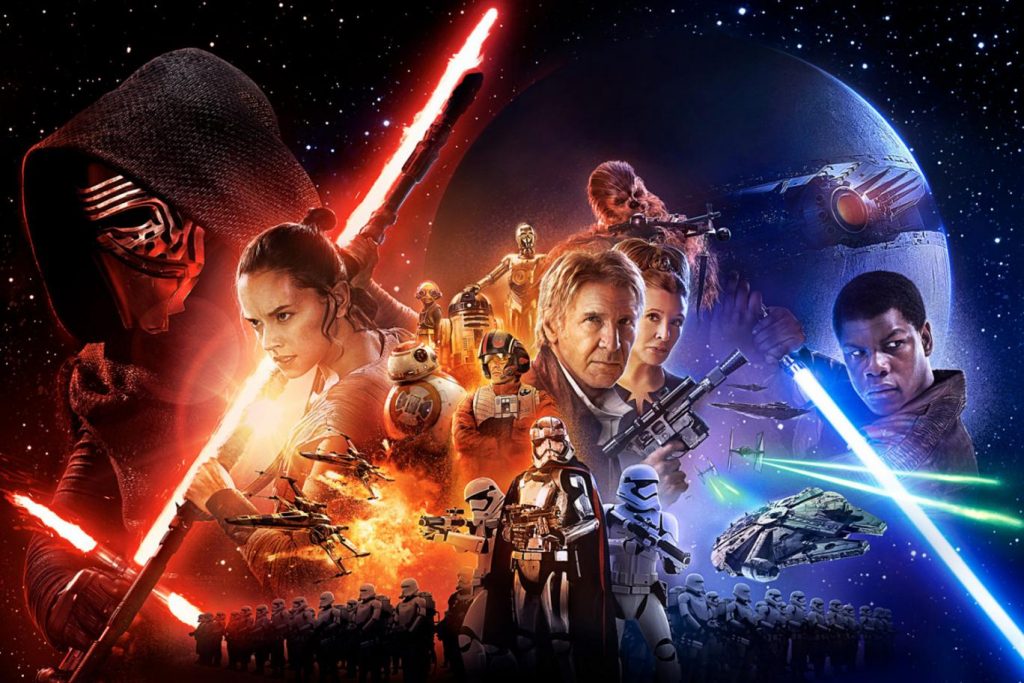 I’ve written before about my love of Star Wars, and how it took several years of willful ignorance for me to rejoin the joyous chorus of the Star Wars fandom, but with all the hubbub around The Force Awakens, I wanted to take a moment to talk about the events leading up to the movie’s third trailer debut.

First, there was the poster reveal on Sunday. In case you haven’t seen it, the image above is the full poster. Just take a moment to look it over. Isn’t it glorious? There are so many things going on in this poster — Leia and Han! R2 and C-3PO! Old school Stormtroopers?! — all of which got me super pumped for the third (and final) theatrical trailer that was due to drop during Monday Night Football.

But then something horrible happened. A couple of trolls launched a viral campaign around the hashtag #BoycottStarWarsVII — their reasoning? Because the film is directed by a Jew and stars a young woman and a black man. Apparently Disney is committing “white genocide” by casting a diverse group of talented actors to portray the next generation of Star Wars characters. Heaven forbid that one of, if not THE biggest movie franchise in history dares to represent two groups of humanity that get overlooked and underpaid time and time again.

Needless to say, the hashtag got me upset, and the moment I started tweeting against it, I started receiving random, hateful, and racist messages from anonymous Twitter users — trolls hiding behind fabricated usernames and ridiculous profile pictures. I ended up reporting and blocking more than a dozen accounts, and I even attempted to engage with one user, but I gave up in the end and walked away. As we all know, there is no reasoning with a troll, and engaging with them only fuels the fire (not matter how badly you want to do it).

Through all the horribleness, though, there was a ray of hope. Selma director, Ava DuVernay, rose above the racism and the hate and started tweeting with the hashtag #WhyICelebrateStarWarsVII. After spending all morning and part of the afternoon fending off trolls, it was a movement that immediately resonated with me, so I added my voice to the others using the hashtag, hoping that we would grow louder than the racist haters — and, in a way, it did! It got a nice write up by Meredith Woerner over at the Los Angeles Times, James Whitbrook covered it for io9, and Bustle and The Mary Sue picked it up as well. I was super thrilled to see so many outlets talking about why we should be celebrating this new movie, but the hashtag really got me thinking about why I love Star Wars in general.

Star Wars is one of those universal stories that almost anyone can relate to, in some form or fashion. Across the entirety of the saga, you encounter love and loss, hope and despair, triumph and tragedy. People might have favorite (and least favorite) films, but they all work together to tell the grander tale of human experience. The characters wrestle with doubt and face daunting situations that seem impossible to overcome, but they learn to work together and rely on each other (and the Force) to ultimately triumph over evil and save the day.

That’s why I’m so excited for Episode VII — it’s the next chapter in this universal human story, and we are all getting to watch it unfold in real time. I didn’t get to grow up with the Original Trilogy, and I was too young when the Prequels came out to really care beyond the fact that they were flashy new movies… but with The Force Awakens, it’s different. It feels different.

I’m not just looking forward to see what happens next in the story. I’m excited to engage with the community surrounding these legendary films. The Star Wars fandom is one of the brightest, most vibrant communities I’ve ever been a part of, and we all got only a taste of that vibrancy with #WhyICelebrateStarWarsVII. In that moment, people from all around the world and different backgrounds came together to celebrate not just The Force Awakens and its diversity, but the entire saga and how much Star Wars has impacted the lives of millions across generations. I really can’t wait to see what other incredible things come into being as we march ever closer to December 18 and beyond.

Until then, I’m going to have the third trailer on repeat.