Warning: A non-numeric value encountered in /homepages/28/d647299303/htdocs/app647299351/wp-content/plugins/social-media-buttons-toolbar/inc/php/enqueue.php on line 31
 Harry Potter and the Deathly Hallows: Part 1 Review | The Beginning of the End - Timothy Writes
Skip to content 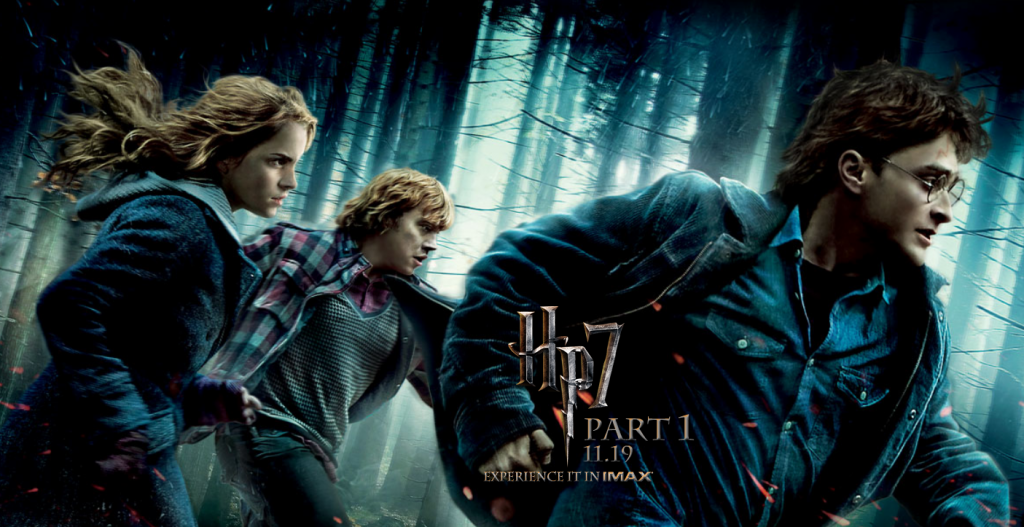 I am a Harry Potter fanboy/purist. I have read every book more than once, seen all the movies (both great and greatly disappointing), and have been greatly inspired by this wonderful series that the extraordinary Jo Rowling has created for us. What began as a child’s tale in the first book, the series has evolved into a mature, dark, and sorrowful story that shows us what true evil is – and how love can conquer all.

I will be judging Harry Potter and the Deathly Hallows: Part 1 on six different levels: acting, casting, accuracy to the book, music, and visual effects, and cinematography/locations. I do not claim to be an expert of cinema, nor do I claim that my opinion is the only one out there; for that is precisely what this review is – my opinion. I am simply giving my thoughts and first impressions over the movie. Whether or not you agree is another matter entirely.

Now, to give you context, as I have said before, I have read the 7th book before – three times, in fact, with the third time within the last few weeks, so my memory of the story is fresh – though I have only seen this new movie once. I intend to leave this review as spoiler free as possible in regards to the movie. So if you haven’t read the book, consider this a SPOILER WARNING.

The acting in the last two Harry Potter movies has been quite lacking in terms of emotion and depth. In the 5th movie, I never really believed in Harry’s angst or sorrow, because Radcliffe never pulled it off to the degree that was presented in the book. Granted, the book allows the reader to “read” Harry’s mind, but Radcliffe’s performance could have been better. Another example would be Dumbledore’s cave scene in the 6th film. I never believed Dumbledore was suffering because Gambon was not convincing – there was no agony, no pain, just whimpering and muttering. The scene felt hollow and fake and it greatly hurt the film.

Thankfully, such is not the case with Deathly Hallows: Part 1. I don’t know who was in charge of getting the actors to become the characters, but they indeed became the characters. Voldemort and Bellatrix have been excellent in the past, but they really shine in this movie, making you cringe with fear and disgust. Other notable mentions are Snape, Mad-Eye Moody, Lupin, and the Malfoy family. None of them had much screen time, but they each gave their all in their performances and it greatly benefits the film. 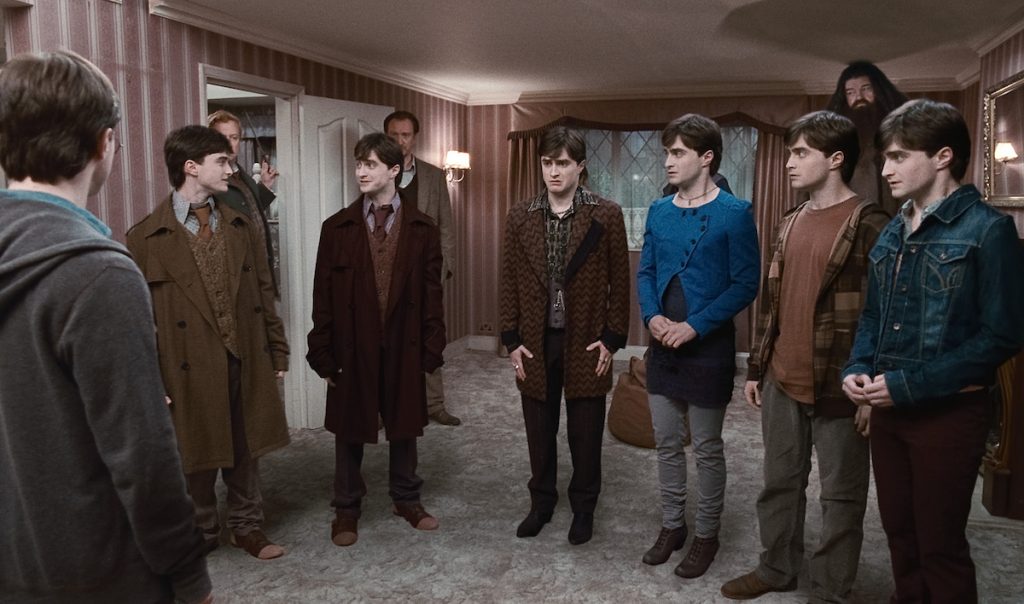 But three main characters – Harry, Ron, and Hermione – are truly the stars of this film, and I would go so far as to say that Emma Watson as Hermione was the strongest of the three. She truly captured the depth of despair Hermione faces in the beginning of the movie, and that despair transforms the character entirely, making her much more real in this movie. Furthermore, the agony she portrays while she was being torture by Bellatrix is phenomenal, but I’m getting ahead of myself. Though that’s not to say Radcliffe and Grint are no good as Harry and Ron. Both far exceed past performances in several surprising ways, especially in their infamous fight scene in the woods. It’s believable, it felt real, and it was bloody awesome.

Casting, in terms of newly introduced characters, was not the greatest. Bill Nighy as Scrimegeour simply did not work. Why? Because Nighy plays the same character in almost all of his movies; same voice, same tone, same stern glares. He brings nothing new to the table, which is highly disappointing considering he’s such a popular actor. Now, don’t get me wrong, he did a good job, but he wasn’t the character the book described. Scrimegrour is supposed to be this strong, intimidating man with a lion’s mane of a beard/hair, grizzled by his years of experience as an Auror. Nighy was a lanky dude with long poofy hair. I rest my case. 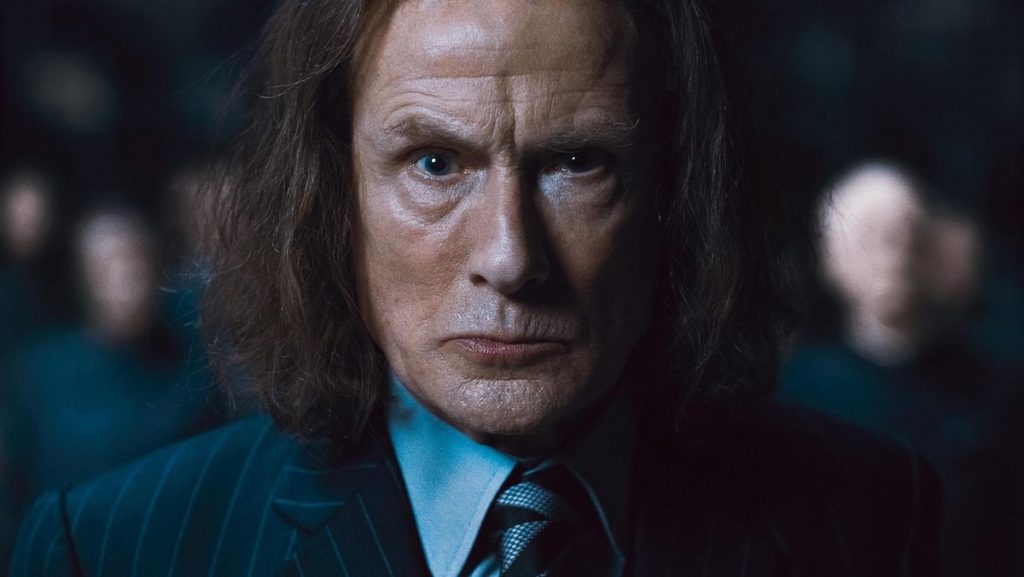 Another woeful addition was Domhnall Gleeson as Bill Weasly. Just as Nighy was incorrect, so was Gleeson. Bill Weasly is supposed to be this hardcore, awesome, buff guy with a ponytail that tames dragons for a living. Instead, we get (again) a lanky guy with gorgeous hair and no muscles. For crying out loud, Rupert Grint was buffer than this guy! So no, the casting was not that great this time around in terms of new significant people.

Accuracy to the Book

Going into this movie, I had high hopes, but low expectations. Cautious optimism, if you will. David Yates had destroyed the last two movies (Half-Blood Prince being my favorite book), so I was worried how badly this movie was going to be botched and slaughtered. But, to my surprise, this movie is the most accurate to the books since the first two movies – and that’s saying something.

From the opening to closing scenes, there was very little deviance from the source material. The main plot-line remained intact, and characters even quoted lines directly from the book. Never have I been more ecstatic while watching a book-based film! It was a purist’s dream come true! There were a few changes made to the movie, such as when Harry and Hermione go to visit Godric’s Hollow, or when the trio sneak into the Ministry of Magic, but these changes (for the most part) are explained within the movie by the characters, or they are a logical alternate to what actually happened in the book. 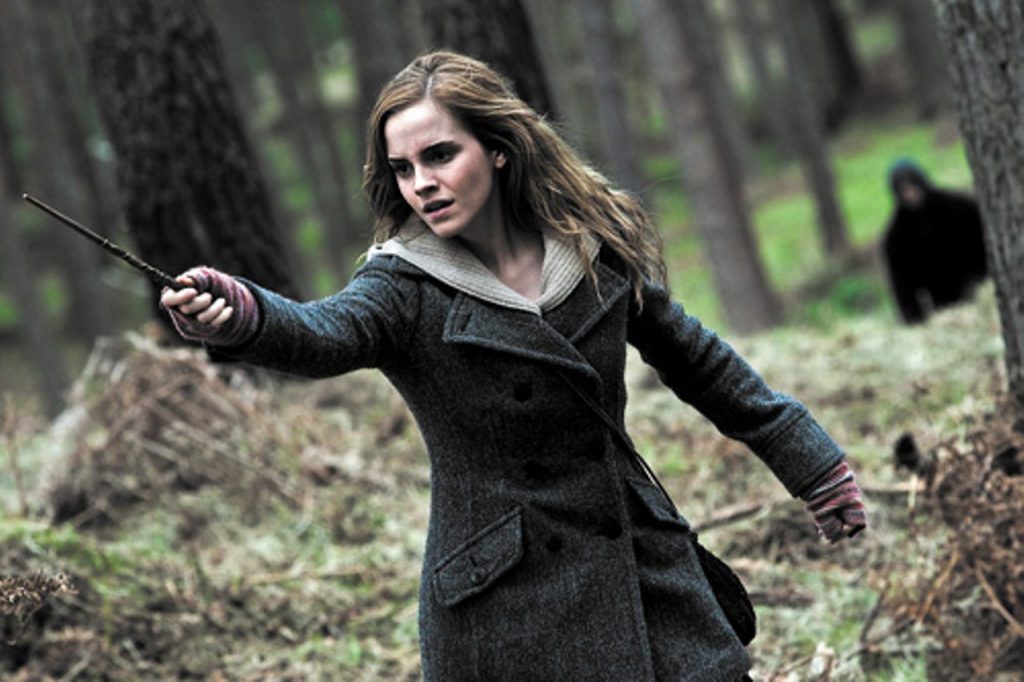 There are no “Burrow-destroying” moments in this film, and because of that, Deathly Hallows: Part 1 is a testament to how a book-based movie should be created. There is one particular scene that I have heard grumblings about, and that is when Bellatrix is torturing Hermione. Bellatrix in the movie does something different than in the book, but for me that something is far more cruel and gruesome, showing how depraved and wicked Bellatrix really is (and Bonham-Carter truly captures the essence of the character, resulting in a chilling performance). As for the other variations, there are a few, such as the wedding scene and Harry’s Birthday, but they are trivial when compared to the changes in past films, and they don’t add to the main plot, so for me they don’t really matter.

It’s unfortunate John Williams didn’t return to score the final Harry Potter films, but Alexandre Desplat delivers a strong score that blends remarkably well with the movie. And, in many ways, I think Desplat’s style fits the dark tone of the film much better than Williams’. Williams introduced us to the magical wizarding world and Hogwarts with marvelous, bombastic music – most notably, Hedwig’s Theme – and many people have griped that Desplat did not use Hedwig’s Theme enough in this film. However, I would like to point out one thing: the gang is not at Hogwarts anymore. They are on the run, searching to destroy Voldemort, and Desplat captures the dark themes of this movie very well. 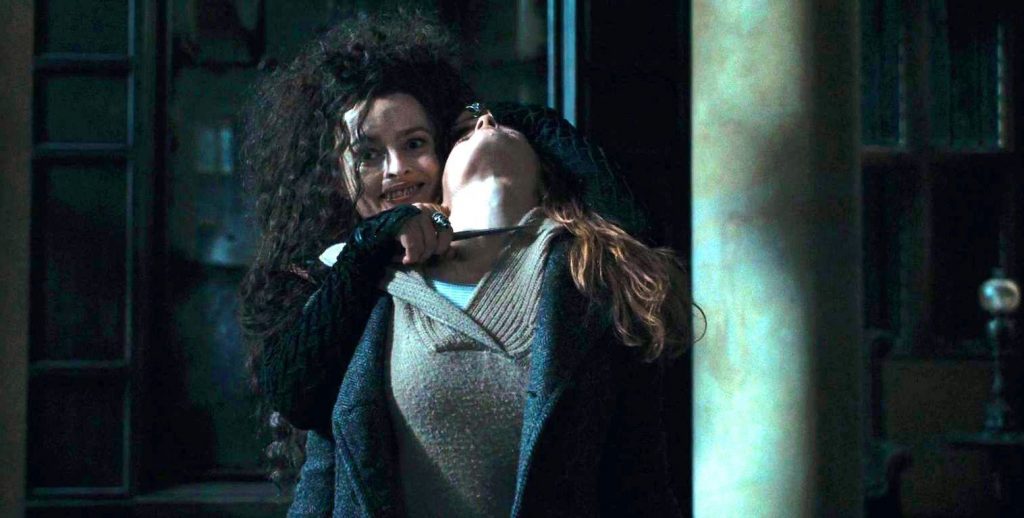 Furthermore, all of Williams’ music sounds very similar. Harry Potter, Star Wars, Home Alone, Hook – they all sound the same! Yes, there are differences, but you can tell a Williams piece just by listening to it, and I think Desplat’s style is the perfect kind of change for this movie – especially after Nicholas Hooper’s lackluster scoring of the last two films. I can’t wait to hear what Desplat composes for the finale!

The CG in this film is the best in any Harry Potter film to date. From the Dementors to the flying Death Eaters, the quality of Deathly Hallows is amazing. I don’t like they way they changed how Patronuses look, nor do I like the Dementors of the last few films (Prisoner of Azkaban Dementors are the best) but that’s trivial griping on my part. Dobby and Kreacher, on the other hand, have never looked better. The texture of their skin and interaction with the human cast are very convincing, though they seemed a little off. I remember their skin tones to be grayer and more leathery, but in this film their skin is peachier and more human like. 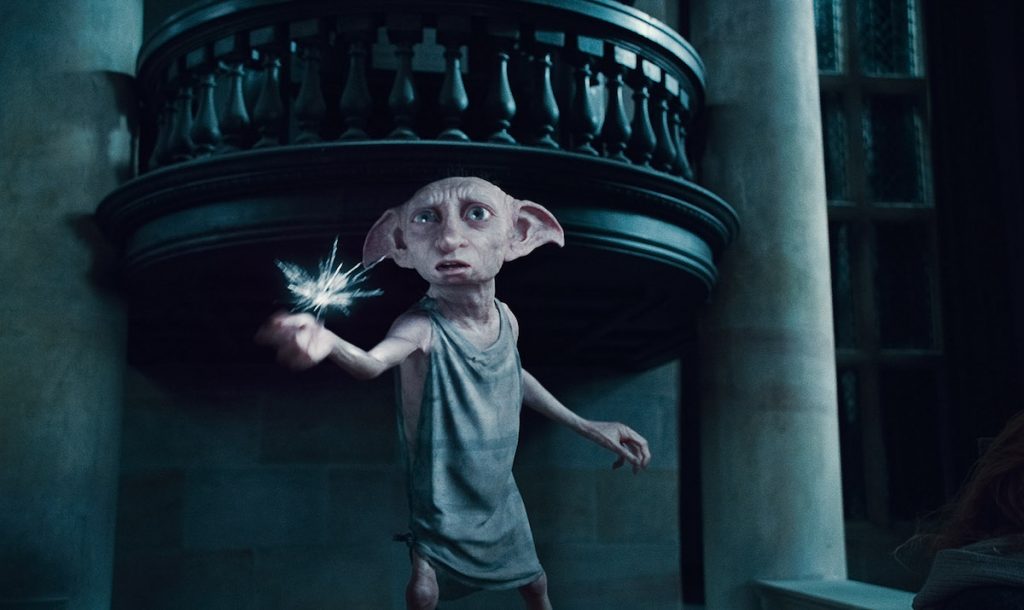 Other excellent effects would be Nagini, Voldemort’s pet snake, Voldemort himself (his face), and the magic/explosions throughout the film. The action pieces are very intense and the graphics are impressive. Nothing on the scale of Dumbledore’s fire-lasso of the last film, but they were all good nonetheless. Perhaps one of the most awe-inspiring moments was when the seven Harrys were leaving his house; the swarm of Death Eaters was incredible.

Gone are the halls of Hogwarts and the trees of the Forbidden Forest – Harry and the gang are on the run, and the vistas of their travels are breathtaking. One panning scene shows them walking across a rolling green hill with mountains in the distance, and another shows them on a cliff next to the ocean. These scenes show just how small the Trio is compared to the world and further illustrates the scope of the journey ahead of them. The locations are just as impressive, with Malfoy Manor, the Ministry of Magic, and Godric’s Hollow all being faithful interpretations of how the book describes them. The repaired Burrow just looks stupid, however, and I will never forgive the director for destroying it in the last film.

Harry Potter and the Deathly Hallows: Part 1 was a brilliantly made movie that is a near perfect representation of the book. Minor complaints aside, I would say that this is the best Harry Potter film since the first 3 movies. Here’s hoping that the final film will be as accurate, though judging from interviews and trailers, it looks like the director has changed the final battle. But one shouldn’t think about such things or one will just get upset.